How Does RuPay Card Help Indian Students In Russia? 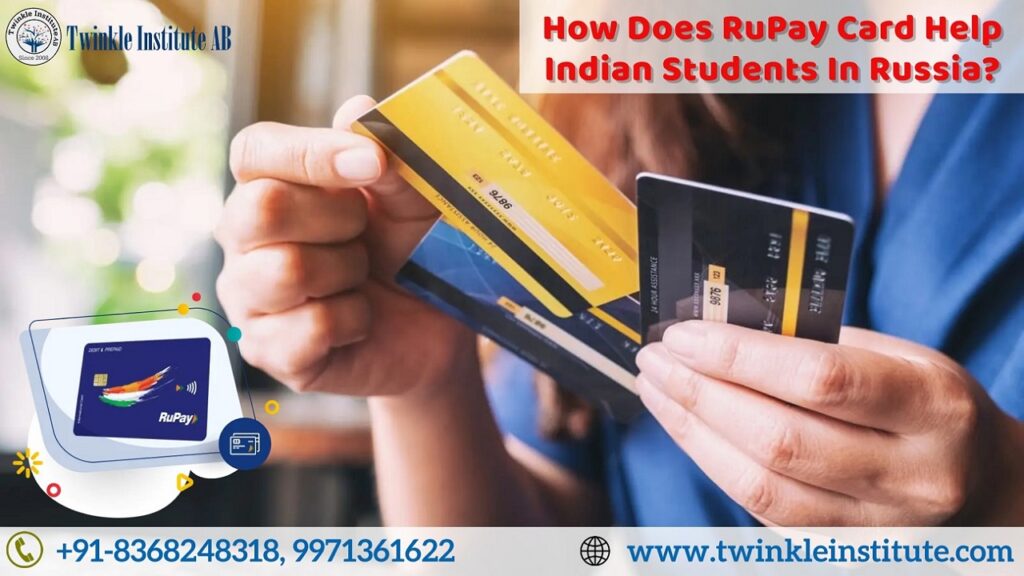 India and Russia have a long history of economic, political, cultural, and commercial ties. For example, Russia has long been a partner of India in nuclear energy or various high-technology space projects, as well as bilateral trade policies, science and technology collaborations, and strong cultural ties between the two countries. Furthermore, Russia has well-established medical universities that have been approved by the National Medical Commission (formerly the Medical Council of India), and thousands of Indian students are pursuing MBBS studies in English at these institutions.

Russia and India are currently negotiating the acceptance of their financial payment systems in order to make future payment procedures more seamless. The mutual acceptance of RuPAy (India) and Mir Cards (Russia) will allow Indian and Russian citizens to make hassle-free payments in their respective currencies, Indian Rupees and Russian Ruble.

What is a RuPay Card?

RuPay is an exclusive and novel international card payment network in India that is widely accepted at ATMs, e-commerce websites, and POS devices throughout the country. The name RuPay is derived from two words: “Rupee” and “Payments,” and it is India’s very own card payment initiative. It is an extremely secure network that protects its users from anti-phishing attacks.

The benefits of using RuPay cards by Indian MBBS students in Russia will be numerous, including:

RuPay cards are currently issued by over 1100 banks, including private sector, public sector, regional rural, and cooperative banks. Furthermore, RuPay is affiliated with over 600 international, regional, and local banks across the country.

What is a MIR Card?

MIR is a national payment card in Russia sponsored by the Russian Federation’s government. The National Card Payment System (NSPK), established in 2014, developed technological infrastructure and commercial agreements to begin ATM and POS acceptance for MIR. MIR cards are already accepted at more than 85% of POS terminals throughout the country and in neighboring countries. One of the primary goals of MIR cards is to ensure safe money transfers and to keep national payments stable during economic downturns and political upheavals in the country.

With over 70 million MIR cards in circulation, the Russian payment system has emerged as a major competitor to Mastercard, Visa, and other credit card networks.

A Brief Summary: India and Russia May Accept RuPay and Mir Payment Systems

According to recent news, India and Russia have discussed the mutual acceptance of RuPay and MIR cards in both countries in order to build a financial infrastructure that is unaffected by other countries’ sanctions against Russia. Both countries are collaborating to integrate the National Payment Corporation of India’s Unified Payments Interface (UPI) and the Bank of Russia’s Faster Payments System (FPS).

Because Indian students make up a large proportion of international students studying MBBS in Russia, the above-mentioned initiative by the Indian and Russian governments will undoubtedly benefit them.

The following are the benefits of mutual acceptance of financial systems for Indian MBBS students in Russia:

If both governments’ plans come to fruition, Indian students studying MBBS in Russia will have the financial freedom to manage their monetary resources wisely, reducing their reliance on the limited Russian currency.

The establishment of a friendly financial system through the acceptance of RuPay and MIR cards in Russia and India will be beneficial to the citizens of both countries. Such an initiative will be another step toward the positive manifestation of Russia and India’s strong relations. Whereas the major Western countries have imposed sanctions on Russia, India’s support is a huge relief.

Because the vast majority of Indian students study MBBS at India’s top medical universities, mutual acceptance will be a welcome relief to them. With this news making its way around the internet, they must be crossing their fingers and hoping for a quick implementation in the future.